What Are the Elements of a Breach of Contract Claim? 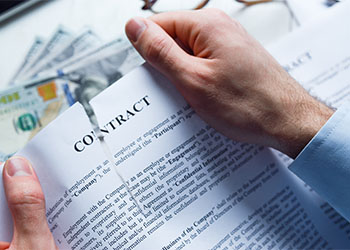 A contract exists when two parties enter into a mutual agreement to act or not act in a certain way. A breach of contract exists if one of the parties fails to honor its part or obligation of that agreement.

This “nutshell” view of contracts and how they can be breached glosses over a lot of important details, beginning with the question, “Was the contract legally valid in the first place?” There's also the question of whether the alleged breach caused enough harm to warrant legal action or demand for corrective action.

In short, for someone to claim a breach of contract, that person or entity must establish that the contract said to have been breached was legally enforceable. They must also establish that the action or lack of action by the alleged breaching party was serious enough to cause harm – that it wasn’t so minor that the overall existence and continuation of the contract were never threatened.

If you or your business in or around Birmingham, Alabama, is being accused of a breach of contract, or if you’re looking to remedy a breach by another person or entity you’ve contracted with, contact the business litigation attorney at Clark Law Firm PC.

John is dedicated to helping small and medium-sized companies throughout Alabama and the Florida Panhandle resolve disputes and issues that threaten their continued operations and even survivability. With a background in banking and finance in addition to his 17-year practice of law, John brings a unique perspective to each situation that can lead to creative solutions outside – and inside – of the courtroom.

What Constitutes a Valid Contract?

Contracts can be written, oral, or even implied through the continued actions of the parties involved. Some people believe that a handshake agreement cannot rise to the level of an enforceable and legal contract, but it certainly can – and often does. Your best bet, as always, is to get everything in writing rather than rely on people’s memories and interpretations.

Though not all analysts or scholars agree on the exact number and naming of the elements needed to constitute a legal contract, courts have generally recognized the need for the following five elements to be present:

AN OFFER: Someone or some party must make an offer to another person or party to commence the creation of a contract. For instance, Company A – which manufactures drones used in agriculture – approaches Company B to procure the microchips needed to operate the drones. Company A makes an offer to buy a specified number of chips at a specified interval (or even just once, for that matter).

ACCEPTANCE: The next step is for there to be an acceptance of the offer by both parties. In our example, Company B agrees to supply A with the chips.

CONSIDERATION: Both parties must be giving and receiving something they deem of equal or sufficient value. Company B agrees, for instance, to supply X number of chips on a monthly basis for X number of dollars. Company A consents to that arrangement.

CAPACITY: Both parties must be of legal age to complete the deal, and both parties must also possess the mental capacity to agree to the contract. That is, one party cannot be under the influence of alcohol or drugs that prevents careful consideration of the offer or cannot be lacking the mental capacity to do so because of a disease or physical/mental condition. Neither party can be coerced or bullied into the agreement either.

LEGALITY: A contract is not valid if it represents illegal actions or activities. A contract for prostitution, drug sales, or human trafficking, for example, cannot be valid.

While all of these elements could easily be present in an oral agreement, the problem arises if the issue ends up in court. Company A could claim one version of the contracted terms and Company B another. Since there is no written agreement, a court case might boil down to which side appears more believable or has the most witnesses.

Therefore, a written contract is always the safest route to protecting the rights and interests of all parties involved, and even then, it must be well-crafted and unambiguous.

On the most basic level, a breach of a contract can be either minor or major, also called immaterial and material.

Using our drone/microchip example, say the contract calls for the microchips to be delivered on the first business day of each month, but one month, Company B is a day or two late in delivering the chips. The delay might cause Company A some reshuffling of its work or sales schedule, but it doesn’t threaten the continuance of the contract itself. Thus, it represents a minor or immaterial breach.

Now, if Company B ceases making deliveries entirely, or does so in such a sporadic manner that Company A suffers financial losses, then the breach can be said to be major or material. Material breaches, because of their seriousness, can warrant legal action to recover for losses and/or to make the agreement “whole” again.

Another type of breach is called anticipatory. If Company B one day announces that it can no longer supply Company A with microchips, then that action represents what’s called an anticipatory breach. When an anticipatory breach occurs, the other (non-offending) party can either terminate the contract immediately or immediately seek restitution through a lawsuit. There is no need to attempt to resolve the issue through negotiations or mediation before taking legal action.

A breach of contract is considered neither a crime nor a tort (a civil wrong). Thus, punitive damages are rarely available. Generally, if a breach of contract lawsuit is filed, the aggrieved party can seek restitution for any losses suffered and/or seek enforcement of the provisions of the contract going forward.

In other words, the preferred legal remedy for a breach of contract lawsuit is to render the aggrieved party “whole” again, either through compensation for losses, fulfillment of the contracted terms going forward, or both.

When it comes to contracts, it’s important to get them right from the very beginning. Have your attorney review the terms of the proposed contract, make necessary revisions to protect your rights and clarify your obligations, and ensure that it is finalized as a written document that can be presented to a court of law if necessary.

If you are seeking to remedy a breach of contract, or you are being accused of a breach, you should immediately begin negotiations to resolve the matter, and this is best done in the hands of an experienced attorney. If you yourself attempt to resolve the situation, you may say or do something that only complicates the issue. Rely on experienced legal counsel.

Clark Law Firm PC and its business litigation attorney stand ready to help you with all issues relating to contracts, whether you’re in the drafting stage or later when disputes or differences need to be resolved. Reach out immediately if you or your business located in Alabama or the Florida Panhandle face a breach of contract dilemma.

What You Need to Know About Tortious Interference What Are the Elements of a Breach of Contract Claim? What Qualifies as a Trade Secret? Can I Sue Over Bad Reviews of My Business?